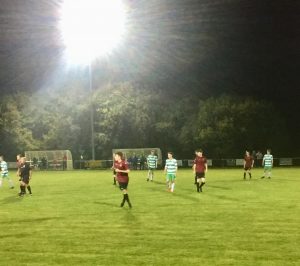 We were much slower in getting going in the first half but did eventually took the lead after  the visitors keeper saw his kick pounced on by striker Greg Preece who outpaced his marker before finishing well to open the scoring. (1-0)

The lead lasted five minutes, a good move down the right saw the Uni number ten get on the end of a cut back (1-1)

We regained the lead when striker Matty Tong saw his mid air volley loop up over the keeper after a cross came from the right courtesy of midfielder Brendan Hackett.  (2-1).

Both sides had other chances to score leading up to half time, the Uni management would of been disappointed on the strike of half time when their number nine missed a header from a corner just five yards out with the goal at his mercy.

Whatever was said at the break the players obviously listened as we came out a different side. We dominated possession for the majority of the second half.

After knocking on the door for long periods it was Jack Biggs who finally gave us a cushion with a headed goal from a Hackett corner. (3-1)

Preece wrapped the scoring up with ten minutes to go making no mistake with a close range volley.

Overall another good performance especially on the second half showing. I think the Uni will be a good outfit once they’ve played together for a few games, they had three very useful players who stood out.