The Saints lost 0-1 this afternoon in the Radnorshire cup final. 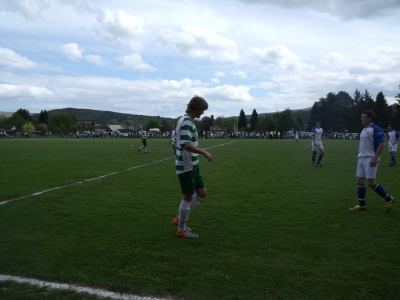 Llandrindod were the better side in the early stages with their midfield seeing plenty of the ball but never really testing Ian Jones in the Saints goal who was standing in for the cup tied Bryan Kirkham, the Saints were relying on counter attacks with Steve Goodwin supporting lone striker Josh Davies.

The best chance in the first half saw Tom Weaver hit a sweet volley but Adam Wright pulled off an excellent save at full stretch tipping the ball around the post for a corner. ht 0-0.

The start of the second half was simular to the first with Llandod probing but again were finding Preece and Havard tough to breach. The opening goal came when Llandod broke down the right and crossed to the back post where an unmarked player headed into the net, the Saints back four all called for offside but to no avail.

The Saints finally started putting pressue on the Llandod defence and again Wright pulled off another brilliant save tipping over a Chris Preece looping header and turning a Sam Bradley shot around the post. Paul Bishop looked dangerous on the counter attack but when he did get past the Saints defence he pulled his effort wide. The Saints had a few corners in the last couple of minutes but it wasn’t to be and the ref blew up with the final score 1-0 to Llandod.