The goals were scored by Kevin Jones (2), Josh Wisniewski and Gavin Williams.

The Saints dominated the first half and it wasn’t long before Kevin Jones broke the offside trap and lobbed the keeper to put the home side 1-0 up,  Jones then doubled the advantage after he combined with Josh Wisniewski. The two strikers were causing the visitors all sorts of problems in the first period, Wisniewski continued his recent rich vein of scoring when he netted number three, Jones did get the ball in the net for what he thought was his hat-trick but it was ruled out for offside.

The home side must have thought the game was over at half-time because the second half belonged to Bont who looked like eleven new players, they never caused the Saints a single problem in the first half but were dominant in the second, however, it took them until the 70th minute to pull a goal back and just a couple of minutes later on a rare attack Gavin Williams lobbed the keeper to make it 4-1 and game over.

The lads played well in the first half and then switched off ready for the end of season of fun which was planned for after the game, they did the job though and finished the league campain 4 games unbeaten, I was very impressed with youngster Tom James at centre half today, he showed a maturity well behond his years. 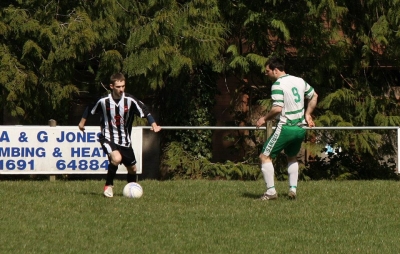