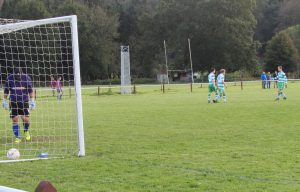 Brendan Hackett puts us 0-2 up. 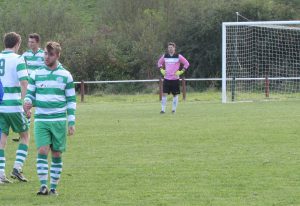 It must have been a dream last week, winning 3-0 and not conceding two early goals. This week’s game returned the Reserves to the that same old pattern. Midway through the second half two opportunistic goals by Knighton left the Reserves with a mountain to climb. Admittedly, this was not helped by a different team to last Friday but nevertheless, giving away early goals is something all teams know not to do.

Some stirring and strong words from Jamie Howard at half time ensured a far better second half. It was then no surprises that it was Jamie who raced into the box to head in a low cross. This gave hope that as before the Reserves could get something out of this game. The team pushed well, unsettled Knighton but at times their touches or final ball wasn’t quite there and the game ended 1-2.

We hope for an all round improvement in our first cup game of the season on 5th November, let’s hope they’ll be a proper sparkle to the team that day!