Manager Gareth Jenkins fielded most of the reserve team from last season plus two first team players from last year.

Our young side were excellent throughout and came away with a 1-10 win.

This was a return to Orleton Colts after my debut visit for the same pre-season fixture two seasons ago and the ground had not changed during that time. Both teams were commencing their pre-season fixture list this evening and had met towards the end of last season when the Saints prevailed by a 2-0 scoreline in the Hay Senior Cup semi-final at Forset Road. Orleton Colts had completed last term mid-table in the Herefordshire FA County League Premier Division following a good second-half to the campaign. Hay St Mary’s finished mid-table in the Spar Mid Wales League First Division but had elected to down a division after several members of last season’s squad indicated they would be leaving the club. The Saints took this course of action rather than having to withdraw from the First Division during the course of the upcoming campaign and tonight’s squad consisted largely of last season’s Mid Wales League (South) winning reserve team.

The match was due to commence at 7:30pm but was already underway on arrival and discovered it started approximately 15 minutes earlier than planned. Adi Lawford had already given the Saints an early advantage on the 15 minute mark after converting Matty Tong’s pull back from the byline. The front man then completed his treble three minutes later with a first-time chipped effort over the Orleton Colts goalkeeper from nearly 25 yards. That was the end of the scoring for the first-half but the visitors extended their lead two minutes after the break when midfielder Callum Maddy converted Tong pull back from close range. Lawford then netted his fourth goal of the evening with a 20 yard effort that found the far corner of the net.

Tong then made it a half-dozen for the Saints when his shot nestled inside the home goalkeeper’s near post. The young striker then netted again three minutes later when he latched on to a long clearance forward and raced cleared before firing a shot into the roof of the net. Darren Horrigan then found himself on the score sheet in the 78th minute before fellow youngster Kyle Harding extended the Saints’ advantage four minutes later. The Owls pulled a goal back in the 85th minute when a low cross from the edge of the penalty area was met with a low shot that beat Steve Jones in the Hay St Mary’s goal. Lawford then completed the scoring by netting his fifth of the evening after curling a shot into the corner of the net from the edge of the host’s penalty area.  Match report thanks to barcud-coch non league matters. 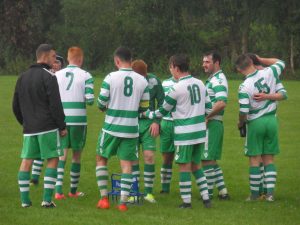 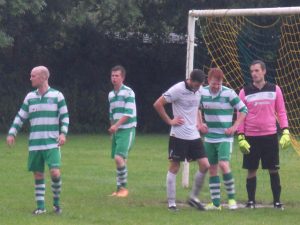