Goalscorers were Gav Williams, Chris Preece, Stu Snedden and Brendan Hackett, Hackett was awarded the man of the match bottle of champers after from the Presteigne committee. 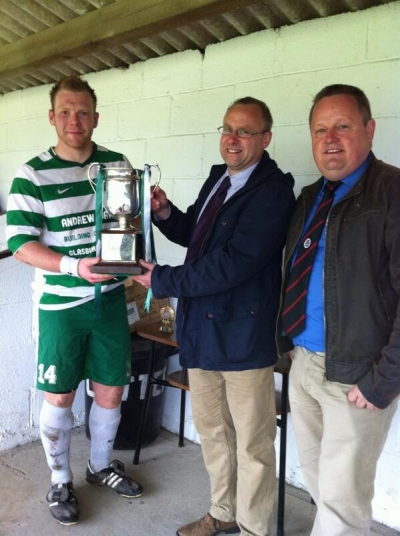 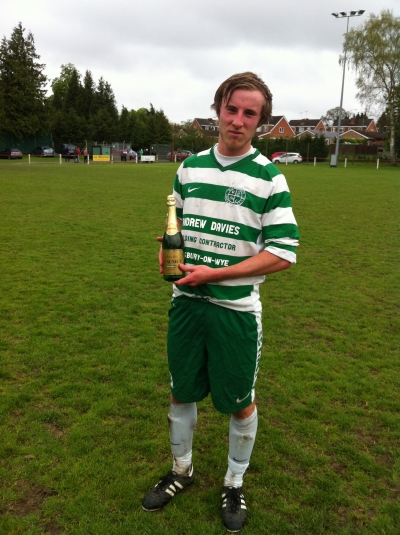 Midfielder Brendan Hackett with the man of the match champagne. 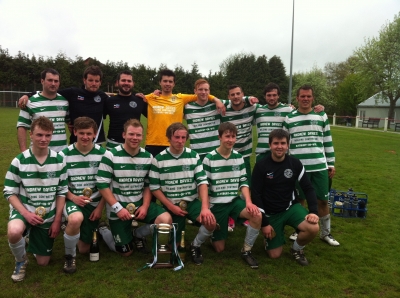 The game was a great advert for local football with two sides wanting to play the right way. The Saints started the brighter, knocking the ball around whilst keeping possession, however, it was Knighton who created the first couple of chances first Wozencroft went close then top scorer Bird shot across the face of the goal. Kev Jones turned his marker 25 yards out but his shot flew over the bar, Wisniewski went close as well on a couple of occassions, some probing passes from midfielder Jamie Howard kept the reds back four on their toes throughout the first half.

It was Knighton who opened the scoring through the unfortunate Stu Snedden of Hay, the fullback headed into his own net whilst under pressure from Wozencroft after a Sutton cross.

Gavin Williams equalised after 35 minutes, Wisniewski crossed to the back post and the left winger hit a right foot shot past the diving keeper.

On the stoke of half time the Saints were awarded a free kick some 30 yards out central, midfielder Brendan Hackett chipped a ball in to Wisniewski who headed it down into the path of Chris Preece, he hit a half volley from 12 yards giving the keeper no chance. Ht 2-1.

The Saints were slow out the blocks at the start of the second half but good defending through Tom Weaver, Tom James, Rory Hackett and Stu Snedden kept Knighton at bay, up the other end Gav Williams was giving veteran Girolami a torrid time.

On the hour mark Connor Bird showed why he is the leagues top scorer with 2 identical goals, one after 60 minutes and the next 4 minutes later, on both occassions he outpaced the Saints back four to put his side 2-3 up.

Phil Davies came on to replace the injured Preece and man mark Bird, this worked well as Bird didn’t have another shot on goal.

With 15 minutes to go it was 3-3 after a lovely Stu Davies throughball found the overlapping Snedden, the fullback scored after hitting his shot across the diving keeper, this one went in at the right end!

In the last ten minutes Wilf Ratcliffe replaced Snedden, Williams dropping to fullback with the youngsters slotting in on the wing, Brendan Hackett was starting to have more of an influence on the game, his skill and fitness levels were beginning to tell, with hardly any time left Tom James broke away down the right and squared the ball to Hackett who burst into the box and fired in the winner to the delight of his team mates. ft 4-3